GWR spreads festive cheer throughout its peoplevalue rewards platform and boosts scheme engagement by more than 240%.

GWR (Great Western Railway) is one of the UK’s largest train companies, with over 100 million customers a year and around 6,500 employees. It’s dedicated to being a great place to work and has been working closely with peoplevalue since December 2018 to deliver valuable ‘thank yous’ to its people using its reward & recognition programme – GWR Rewards.

GWR Rewards leverages the very best of our technology to incorporate several different reward & recognition elements that align with the company’s unique values and culture. On the scheme’s social wall – a real-time feed of recognition, news, events and photos – GWR employees can thank their colleagues as well as ‘like’, share and comment on posts. They can also receive points for hard work and service milestones which they can exchange for a reward of their choice via the scheme’s integrated reward catalogue.

GWR delivered its festive thank-you campaign to recognise and reward its people by spreading Christmas cheer throughout the GWR Rewards platform. The flexibility of peoplevalue’s reward and recognition solution meant that we were able to update their scheme to support this campaign and help the team celebrate colleagues in a way that truly worked for them.

Coinciding with a Christmas-themed brand update on the GWR Rewards website, including artwork designed by GWR colleagues, the campaign consisted of a daily prize draw in the run up to Christmas. 40 employees were picked at random on each day and awarded either £15, £30 or £50 worth of points – from a total prize pot of £12,000 – to spend on an item of their choice from the reward catalogue.

A festive, branded email was sent to employees to launch the campaign which was followed by daily notification emails encouraging users to log on to the scheme and find out if they had been picked as a winner. When they logged onto the site, they were greeted with a themed homepage banner, a pop-up message about the campaign and, partway through the scheme, a Christmas thank you message from GWR Managing Director, Mark Hopwood. On the scheme’s social wall, daily news posts were uploaded by the admin account announcing that day’s winners which users could interact with.

Not only was the campaign successful in spreading business-wide Christmas cheer, but, creating a campaign whereby users could only find out if they’d won a prize by logging on to their scheme was a highly effective way to increase site traffic and scheme engagement.

The campaign boosted scheme engagement by over 240%

On average, before the campaign, 857 GWR employees were logging into the scheme each 28-day period. During the period in which the campaign fell, the number of employees logging in to the scheme rose to an impressive 2,956 – which equates to 45% of the employee population. This is a huge 244% increase against the average for the same period.

The campaign has also had an impact on long-term engagement with the scheme. The number of logins and thank you messages sent via the social wall have remained higher than average in the first few periods of 2022 and throughout GWR’s most recent campaign.

Commenting on the success of the campaign, GWR’s Account Manager at peoplevalue, James Hickling, said:

‘The uplift in system usage and activity levels during the campaign have far exceeded our expectations. We’re delighted with the results and are now looking forward to delivering the next element of our communications plan.’

All in all, these results show us the true impact of a successful employee engagement campaign. They demonstrate the importance of finding fun and creative ways to communicate with and focus users in order to boost engagement. We’re delighted to have been able to adapt the GWR Rewards scheme in such a way that made this campaign possible and has had a lasting impact on scheme engagement.

Sorry, the comment form is closed at this time.

This website uses cookies to improve your experience while you navigate through the website. Out of these, the cookies that are categorized as necessary are stored on your browser as they are essential for the working of basic functionalities of the website. We also use third-party cookies that help us analyze and understand how you use this website. These cookies will be stored in your browser only with your consent. You also have the option to opt-out of these cookies. But opting out of some of these cookies may affect your browsing experience.
Necessary Always Enabled
Necessary cookies are absolutely essential for the website to function properly. This category only includes cookies that ensures basic functionalities and security features of the website. These cookies do not store any personal information.
Non-necessary
Any cookies that may not be particularly necessary for the website to function and is used specifically to collect user personal data via analytics, ads, other embedded contents are termed as non-necessary cookies. It is mandatory to procure user consent prior to running these cookies on your website.
SAVE & ACCEPT

We’d love to make Christmas special for your team this year.

To find out more, simply fill out the form below and a member of our team will be in touch.

See our solutions up close with a personal tour from a member of our team.

With cost of living increases continuing to create financial challenges for people in the UK, now is the time for businesses to take action to provide valuable, long-term support to help their employees. 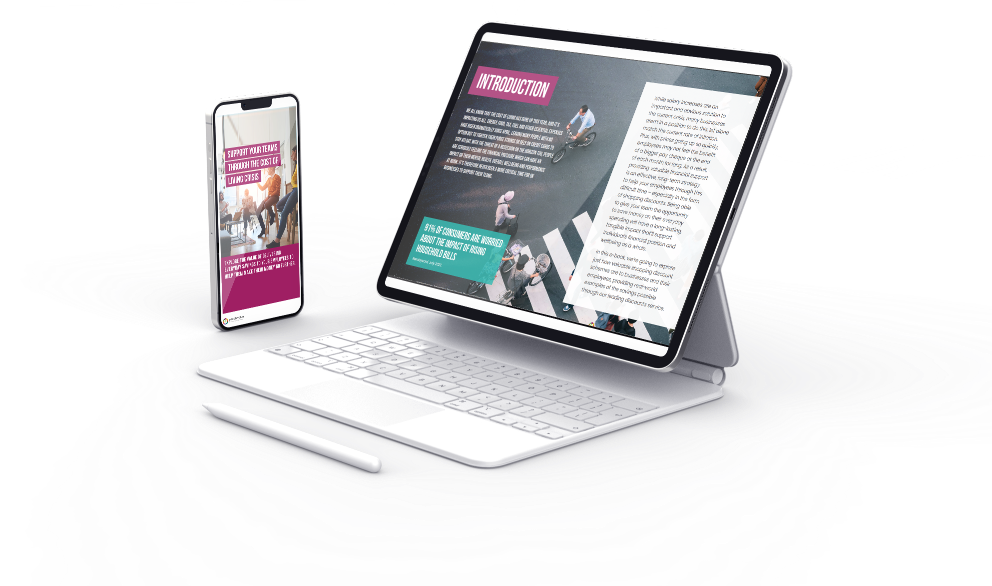 Discover how to help your team make valuable savings and reduce the impact of rising costs this Winter and beyond with our e-book.